M3 Consulting Group to Focus on Eastern Washington During 2018 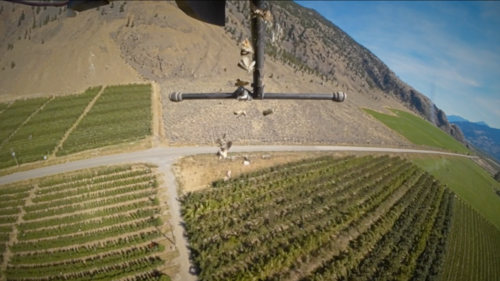 During 2018, M3 Consulting Group will focus efforts on working with emerging North American Integrated Pest Management (IPM) programs. To support this focus, M3 is developing methods to optimize the handling and transport of sterile insects, which has been identified by apple industry stakeholders in Michigan, Washington and British Columbia (Canada) related to the control of Codling Moth. Over the past three seasons, M3 has continued to evolve its lepidopteran sterile insect release program in collaboration with various domestic and international research partners. After the first ever release of sterile insects via UAS in 2015, M3 quickly established itself as a leader in the use of UAS in agriculture. M3's success from 2015 encouraged the consulting group to explore how Unmanned Aircraft Systems (UAS) or “drones” may impact other sterile insect release programs. M3 began to look into how UAS could improve the management of codling moth, an extremely destructive pest of apples. To explore how UAS could impact codling moth control, M3 conducted release studies during 2016. The results of this initial effort yielded a 43% increased recapture of codling moth when comparing a UAS release method to the existing ground release technique which has been in use for over 20 years. During 2017, that number increase to nearly 70% with increased replications and controls. Such improvements in recapture point to the utility of Unmanned Aircraft Systems; not only their ability to release high quality, competitive sterile insects, but also as a tool designed to support Integrated Pest Management in all aspects of management.

During 2018, M3 will combine an optimized transport regime with the release of sterile codling moth as a demonstration of M3’s technologies. The goal of this pilot program is to highlight M3’s abilities to control codling moth populations in targeted regions of Eastern Washington, improving the viability of organic apples in the region. The exploration of autonomous systems for use with the Sterile Insect Technique is timely, as pesticide applications are increasingly attracting negative press. Depending on the region, increased efficacy in the ultimate performance of released sterile insects may further increase the potential of sterile insect release as a viable alternative to the use of pesticides. In the coming years, M3 will explore the development of various “smart” technologies designed to automatically record and report metrics related to crop health. This data will be shared thru the cloud to a centralized location, which will allow M3 to optimize control regimes, further improving the release of sterile insects by targeting releases in hotspots, as needed. Increasing the use of autonomous tools in the field, may increase the performance of sterile insects by decreasing handling and may reduce the overall labor costs associated with operational IPM programs. Beyond supporting apple growers, these technologies will also improve release methods for other lepidopteran pests, including navel orangeworm. 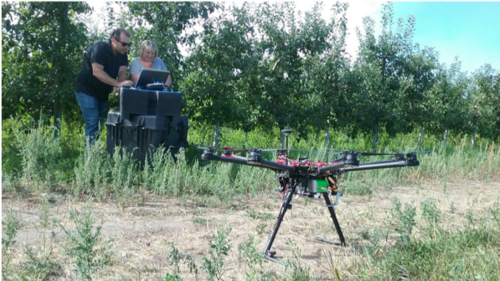 Dustin Krompetz demonstrating the UAS to a stakeholder 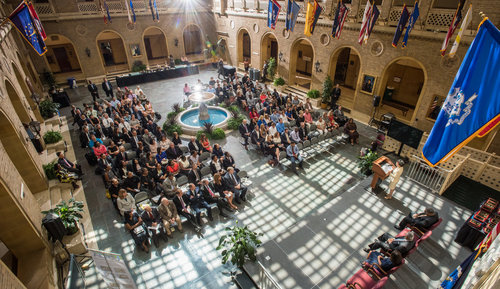 M3 Consulting Group, Native American and Veteran owned, was named the 2017 USDA APHIS Small Business Contractor of the Year. This award was presented in the Secretary of Agriculture's Office in Washington DC and highlights M3's role in modernizing and deploying cutting edge UAS technology in North American agriculture.

When asked about receiving the award, Nathan Moses-Gonzales (Chief Executive Officer of M3 Consulting Group) said, "We see the deployment of UAS and other automated systems as tools which will change the shape and direction of agriculture. Our objectives are to ensure that these technologies are developed rapidly, with sound scientific backing, in order to increase the United State's ability to ensure food security at home, while increasing the attractiveness of our produce abroad."

To this end, M3 is expanding its mission to focus on apple production in Eastern Washington and is looking to hire dedicated individuals in the region. Dustin Krompetz (M3 Consulting Group's Chief of UAS Operations) is actively engaged in developing the necessary routes and inroads to deploy UAS in Eastern Washington during 2018 and will be leading the hiring process.

When asked about M3's role in Eastern Washington, Krompetz said, "M3's goal is to bring 21st century careers to the region. By focusing on autonomy, we believe that we can lay the foundation for Eastern Washington to lead the way in the deployment of autonomous tools to support agriculture."

M3 Consulting Group seeks to hire individuals to operate Unmanned Aircraft Systems throughout Eastern Washington in the Okanagan Valley. If you are interested, please follow the link below, complete the form and we will get back to you.