We use Unmanned Aircraft Systems, or Drones to release sterile insects into an orchard. Once released, our sterile insects find and compete for mating opportunities with wild insects. Matings between sterilized and wild insects do not produce viable offspring. Over time, this technique reduces the wild population. If applied properly, this technique leads to a decline in, and eventually a crash of the insect population. SIT is perfect for suppressing populations, excluding them from leaving a region or preventing the introduction into another. In rare cases, it is possible to eliminate insect species from regions using SIT, as was the case with the pink bollworm and new world screwworm fly. 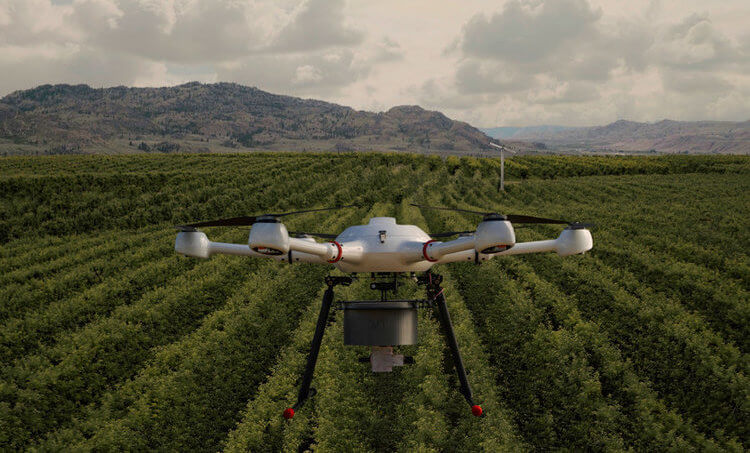 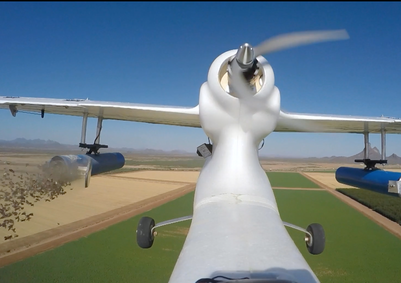 Releasing sterile insects has several advantages over chemical control. First, pesticide resistance is increasing and the cost to develop new chemicals is skyrocketing. Second, organic products are increasing in popularity and sterile insects fall under the organic control category. Third, while resistance has been reported in every class of insecticide, it has never been reported in SIT. Additionally, unlike chemical control, the sterile insect technique does not harm beneficial insects, so secondary pests like mites are kept in check. Finally, unlike most chemical controls, there are no human or environmental impacts from implementing SIT, so there is no re-entry period or maximum residue limits (MRLs) to worry about. Successful eradication of devastating pests such as screw worm fly and Mediterranean fruit fly, serve as examples of the potential of an SIT program.

Codling moth  (Cydia pomonella) (CM) is a key pest of apple, one of Washington’s premier crops with ≈180,000 acres under production. While most of this acreage is managed using conventional production practices, organic production is a substantial and important market sector, making up 10% of total apple production. Mating disruption is considered a foundation of CM management and has brought greater stability to CM control programs. However, both organic and conventional management regimes still suffer from occasional ‘hotspots’ of CM infestation, and CM remains the most dangerous direct pest of apple in Washington State. Codling moth has driven the pest management programs for over a century and given the favorable climate of eastern Washington for reproduction of this pest, it is likely to continue in this role. The increasing frequency of a third CM generation has stretched insecticide resources, which previously were required only to prevent damage from two generations. While there are modes of action for CM control, there is an ever-present danger of insecticide resistance, and non-target effects on natural enemies. A non-insecticidal supplement to control CM is a welcome alternative in Washington State, and increase the long-term stability and sustainability of both conventional and organic apple systems. Organic apple orchards provide an ideal testing ground for implementation of SIR, in that there will be fewer insecticide impacts on released adults. While they have a greater need for supplementary control, all of the lessons learned from organic orchards can be applied to conventional orchards.

Sterile insect release (SIR) in Washington State offers an alternative that could transform the management of CM.

The approach entails sterilization of reared insects that are subsequently released in large numbers to compete with wild males for mating with wild females, thereby greatly reducing fertile mating and consequently the production of offspring. Although initially considered as an eradication technique, SIR is now widely viewed as a tool within IPM programs that can complement other tactics such as mating disruption or insecticides. The primary stumbling block to implementing SIR programs is the startup cost of the moth rearing and sterilization facility; however, a facility exists a few miles from Washington’s border in Osoyoos, British Columbia, Canada, facilitating easy importation of sterilized moths by ground transport, with minimal risk of compromising the viability of the sterilized moths. After decades of use in British Columbia, SIR is considered a proven technique.

Codling moth UAS SIR is the most advanced lepidopteran SIR program in the world related to the handling, transport and release of sterile lepidoptera via UAS.

This program has evolved the state of the arts surrounding UAS SIR significantly over two years. During 2016, a small proof of principle study demonstrated a 40% increase in recapture when compared to the existing ground release methods conducted by All Terrain Vehicle (ATV). During 2017, a more complex study was designed to assess the performance of UAS and ATV SIR in small, medium and large orchard environments. Here, the UAS outperformed the ATV and achieved a 70% increase in recapture. The 70% increase in recapture was a profound result and represents a significant evolution in the development of UAS as an emerging tool to release sterile insects as a part of broader AW-IPM goals and objectives. M3 Consulting Group, Osoyoos Kootenay Sterile Insect Release, Washington State University and Michigan State University are currently conducting a 22 week pilot UAS SIR project to assess the operational viability of UAS technology in support of codling moth suppression. An increase of 70% in recapture may pave the path forward to achieve eradication of this pest from both British Columbia and Washington apple growing regions.