Native to Asia (Busck 1917) and first detected in the United States in 1917 (Hunter 1919), pink bollworm (Pectinophora, gossypiella) is an invasive exotic species in North America. After its initial detection in infested cotton seed imported from Egypt to Mexico (Ballou 1918), the pink bollworm spread throughout North American cotton growing regions (Noble 1969). Since its initial introduction, efforts to control or eradicate pink bollworm have been implemented with varying levels of success (McMahan 1990).

The pink bollworm presents a significant financial risk to cotton with costs related to control and losses reaching upwards of $47 million per year (Simmons et al. 2007). 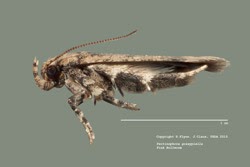 In 2000, the Area-Wide Pink Bollworm Eradication Program (Grefenstette et al. 2009) was established with the goal of eradicating pink bollworm from infested areas within cotton growing regions of the United States. This program was divided into three phases: Phase I started in 2001/2002, Phase II in 2006, and Phase III in 2007/8. The program relied on three primary strategies for achieving eradication. First, the program mapped the entirety of cotton production within the eradication zone, noting variety and surrounding environments. Second, the program used delta traps baited with 4 mg of gossyplure to detect and monitor populations. Finally, the program used a variety of control techniques, including mating disruption (Staten et al. 1988, Cardé and Minks 1995, Lance et al. 2016), cultural controls, Bacillus thuringiensis toxin Cry1Ac (Bt cotton) (Flint et al. 1996, Henneberry and Naranjo 1998, Tabashnik et al. 1999) and the release of sterile insects (Henneberry 1994). The sterile insect release (SIR) program produced an average of 25 million moths per day and aerially released sterile PBW at a rate of 100 sterile insects per acre, six days a week. SIR was a critical component of the IPM program and was relied upon heavily to achieve eradication of pink bollworm within the eradication zone. The last trap capture of wild pink bollworm occurred during April 2012 and since, has not been detected within the United States Eradication Zone.

Pink Bollworm is in the confirmation of eradication stage (NCCPBTAC 2009) and will likely announce eradication at the end of the 2018 cotton growing season. The confirmation of eradication relies heavily on monitoring and surveillance of gossyplure baited delta traps. If a trap captures a suspected pink bollworm, then the insect is sent to a Lepidopteran expert for identification. If it is a pink bollworm, then the APHIS pink bollworm colony used for mass rearing will ramp up to produce over 100,000 sterile moths per day available in 7 days and 1.5 million sterile moths per day available within 30 days. A key component of the rapid response procedure is the ability to release over a small, targeted area. The deployment of Unmanned Aircraft Systems will likely be the preferred response method given the size of the response area (9 sq mi) and the level and pace of production within the Pink Bollworm Rearing Facility. The UAS developed to support pink bollworm rapid response has undergone several iterations and improvements annually due to collaborations with other lepidopteran SIT programs. The release device was tested in cooperation with the Navel Orangeworm program. These tests demonstrated no significant difference between insects passed thru the device and a control population. Field methods have undergone significant improvement in cooperation with the Osoyoos Kootenay Sterile Insect Release (OKSIR) program in British Columbia, Canada. Field trials of codling moth SIR UAS demonstrated a 43% increase in recapture during 2016 and 70% increase in recapture during 2017 when comparing UAS to existing ground release methods.