A Week in the Okanagan With Friends, a UAS, and Some Codling Moth. 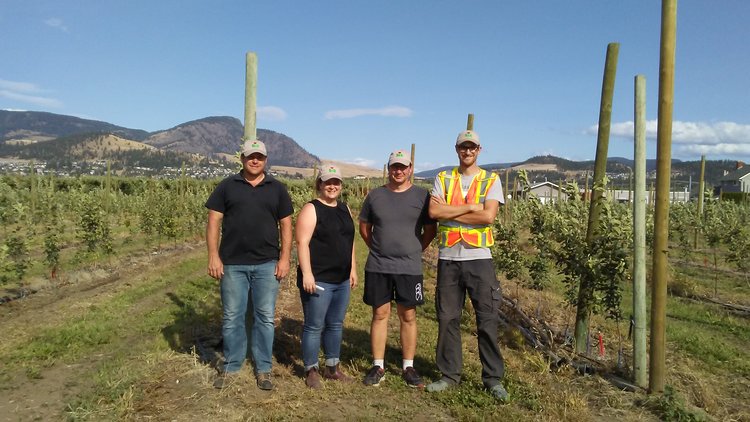 This summer M3 was able to participate in some collaborative research with our partners at the Okanagan-Kootenay Sterile Insect Release Program (OKSIR). This opportunity came about through our participation in a joint FAO/IAEA Coordinated Research Project titled: Improved Field Performance of Sterile male Lepidoptera to Ensure Success in SIT Programmes.

We began planning for this research during the winter months. One of the success stories out of this project was the very successful interaction with Transport Canada. Transport Canada is responsible for the safe integration of Unmanned Aircraft Systems (UAS) into Canadian airspace. Transport Canada was very helpful and answered many questions before we submitted for our SFOC: the Canadian version of the FAA's COA system. We ended up operating the UAS for five days within Class D airspace and the quote from our contact at Transport Canada was "controlled airspace is easier to deal with over uncontrolled airspace, from a risk perspective." That really made us happy as we were concerned about moving the study area to a remote location. It was a joy to work in coordination with the folks in the control tower and Transport Canada. We actually received a site visit; which was my first from a regulatory agency. It was expected though as they were invited to the site. The site visit was a rewarding experience for both the Transport Canada officials and the UAS flight crew. Its not too often that one gets to experience an insect drop from unmanned aircraft. It still amazes us!

The Codling Moth (CM) releases were a follow on from research conducted during the summer of 2016. This was the first known aerial release of CM as the traditional method for dispersal is through a ground release method. In August of 2016 we conducted aerial releases to determine the swath width of the CM from different altitudes. The data that was collected during 2016 showed some interesting results and all parties were interested in duplicating the experiment with added replications in 2017. OKSIR put in a ton of effort to design and support a study with the needed replications. Multiple variables were tested and we will have the results in a few months. OKSIR is a top notch operation and it was an incredible experience to be a part of the study. In total, we operated over sixteen separate test orchards and treated ~125 acres, from above, with sterile CM. It was an awesome experience in a beautiful setting!