When asked about his thoughts on the study, Dustin Krompetz - M3 Chief of UAS Operations - said, "The method shows promise. We need to make some modifications to the release device to meter the proper dose over the release path. We were able to gather data on the swath width of the Mexican Fruit Fly. This should prove very useful when we develop the next version of the release device. We will be able to design the dose per second of flies from the release mechanism in accordance with the velocity of the UAS and the swath width."

The team is currently analyzing the data and anticipates publishing the results later this year or possibly early 2018. The data is currently undergoing analysis, however, the preliminary results look promising, with both USDA and M3 personnel being quiet pleased with the outcomes.

This study will have a significant impact on the field of Sterile Insect Technique. Traditionally, large scale programs used manned aircraft to release sterile insects and relied on ground vehicles to accomplish small scale releases. UAS may serve as a functional hybrid approach between both traditional fixed wing and ground release. The use of swarm technology, however, is expected to have a significant impact.

Nathan Moses-Gonzales, Principal Investigator on Swarm for M3 said, "Previously, Unmanned Aircraft Systems were limited by their range and payload capacity. With swarm, we are able to spread the payload across the systems and effectively increase their coverage area thru this emerging technique."

M3 will return to south Texas later this fall to complete additional testing and prepare for the next set of studies outlined in our 2018 Farm Bill Grant. 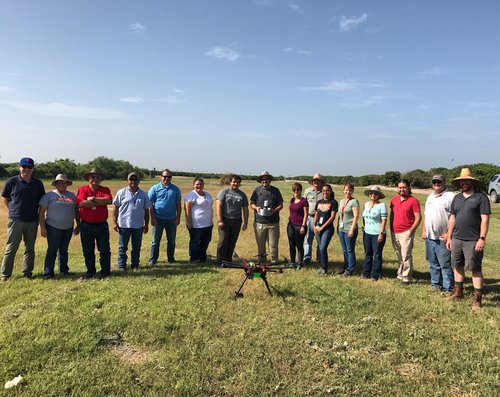 M3 Consulting Group and USDA Personnel in the field observing the release of sterile insect release.